This semester, I had the chance to teach a new course at UMBC on Gender in Modern South Asia focusing on India, Pakistan, Nepal, and Sri Lanka. We began with discourses and representations of South Asian women from the colonial to the post-colonial period and then looked at contemporary case studies related to nationalism, labor and migration, media, the body and social movements in South Asia.

Most students didn’t have a real sense of the region before we started class (and it was a struggle all semester to get them to use “South Asia” instead of a multitude of directional derivatives). Of course, the idea of “South Asia” is debated among scholars as the term is a Cold War era relic used to group together regions for strategic information gathering purposes. Rather than focus on the histories of imperialism that both collapse and divide the region into contemporary nation-states, there has been an emphasis in certain fields to imagine the land stretching from Afghanistan to Bhutan as a unified whole.

Of course, there are real problems with this approach: Nepal, for instance, had a very different experience with the British Raj, than the Punjab region of India and Pakistan. The politics of language and religion continue to divide nations even as they are configured as sovereign entities, such as in the case of Tamil nationalism in Sri Lanka and India, or the fight over religious minority rights in Pakistan.The women’s experience with education in Sri Lanka, where the national literacy rate rivals western nations, is considerably different than what women in Bangladesh face, as non-elite women struggle to access regular and quality forms of schooling from an early age.

At the National Women’s Studies Association Conference in November 2012, I had the chance to attend an excellent panel about teaching “India” from a Gender and Women’s Studies perspectives. The panelists there discussed how these problems are even further complicated when you also bring an explicitly feminist lens to course material and must work even harder as instructors to keep students from falling back on easy assumptions about South Asian women as oppressed and victimized by their culture.

This conflation of culture with experience does not occur only in studies of South Asia, but also in popular press accounts of the region and individuals in the diaspora. In 2011, I was interviewed for an article in Open Magazine about the “rash” of crimes by Indian-Americans ranging from the insider trading conviction of Rajat Gupta, to the charges of bribery against Anjan Dutta-Gupta, to a strange and elaborately staged jewelry heist.

I attempted to complicate the narrative of the journalist by pointing out that culture alone cannot account for the increase in crime among Indian-Americans (not to mention that he clumps together cases involving individuals who were born abroad with those raised in the United States, or in the case of Raj Rajaratnam, with individuals who are not even Indian). However, the story that he tells emphasizes only the “South Asian” cultural aspects of each perpetrator, rather than the circumstances that led them to their fate, or that may have been residing in the United States for years before committing such crimes and were much more aligned with “American” values than “South Asian.” Rather than acknowledge that the crime committed by a multimillion dollar hedge fund trader may have little in common with a dentist living in domestic violence, “South Asian-ness” becomes code for non-American aberration, particularly when the actions of individuals don’t map onto the myth of “model minorities.”

Considering the real challenge of how to then accurately and sensitively represent the countries that make up South Asia or South Asian communities across the globe in the classroom, I was apprehensive about adequately offering a course that could do justice to the deep histories and nuances of the region. Instead of trying to highlight common elements of “culture” that bind South Asia together, we looked at the increasing porousness of borders, for instance, between India and Nepal that has led to the flow of political dissidents, armed revolutionaries, and increasingly, trafficked women and men. We considered the ways in which globalization and the push for liberalization in Sri Lanka and India have led to conflicting ideas about gender roles, especially as rising numbers of women enter the paid employment sector. Finally, we used the course materials to make links across locations, but to also carefully to consider context, history, and politics.

At the end of the term, students had the chance to present original research to the class and write a research brief detailing what they learned. Some of the stellar topics included:

-the rise of sex selection and son preference in India

-the legacies of the South Asian diaspora in South Africa

Still a work in progress, the course was a chance for me as an instructor to test out ways of teaching about a complex region divided by religion, race, caste, class, occupation and wealth. Overall, the students have been excellent participants in this journey and were energizing in their enthusiasm for learning more about South Asia. As we wind down the semester, I’m grateful for the chance to teach about a topic that I love (and in many ways, am always learning about), while also pushing myself to be a better teacher and scholar. 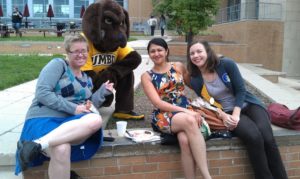